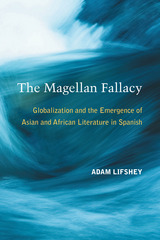 Winner of the 2015 A-Asia/ICAS Africa-Asia Book Prize, a global competition, for the best book in English, French, or Portuguese on any topic linking Asia and Africa.

AUTHOR BIOGRAPHY
Adam Lifshey is Professor in the Department of Spanish and Portuguese and the Program in Comparative Literature at Georgetown University, as well as the author of As Green as Paradise: A Novel, and Subversions of the American Century.

REVIEWS
"This volume serves as a valuable point of departure for the study of a largely unexplored subject: fiction written in Spanish in Equatorial Guinea and the Philippines during and following Spain's colonization. ... Recommended."
—P.W. Manning, Choice
— P.W.Manning, Choice