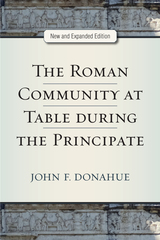 On its initial publication, The Roman Community at Table during the Principate broke new ground with its approach to the integral place of feasting in ancient Roman culture and the unique power of food to unite and to separate its recipients along class lines throughout the Empire. John F. Donahue’s comprehensive examination of areas such as festal terminology, the social roles of benefactors and beneficiaries, the kinds of foods offered at feasts, and the role of public venues in community banquets draws on over three hundred Latin honorary inscriptions to recreate the ancient Roman feast. Illustrations depicting these inscriptions, as well as the food supply trades and various festal venues, bring important evidence to the study of this vital and enduring social practice. A touchstone for scholars, the work remains fresh and relevant.

This expanded edition of Donahue’s work includes significant new material on current trends in food studies, including the archaeology and bioarchaeology of ancient food and drink; an additional collection of inscriptions on public banquets from the Roman West; and an extensive bibliography of scholarship produced in the last ten years. It will be of interest not only to classicists and historians of the ancient world, but also to anthropologists and sociologists interested in food and social group dynamics.
AUTHOR BIOGRAPHY

John F. Donahue is Professor of Classical Studies at the College of William and Mary.