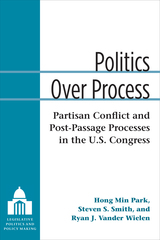 Although the U.S. Constitution requires that the House of Representatives and the Senate pass legislation in identical form before it can be sent to the president for final approval, the process of resolving differences between the chambers has received surprisingly little scholarly attention. Hong Min Park, Steven S. Smith, and Ryan J. Vander Wielen document the dramatic changes in intercameral resolution that have occurred over recent decades, and examine the various considerations made by the chambers when determining the manner in which the House and Senate pursue conciliation. Politics Over Process demonstrates that partisan competition, increasing party polarization, and institutional reforms have encouraged the majority party to more creatively restructure post-passage processes, often avoiding the traditional standing committee and conference processes altogether.
AUTHOR BIOGRAPHY
Hong Min Park is Associate Professor of Political Science at the University of Wisconsin-Milwaukee.

Steven S. Smith is Kate M. Gregg Distinguished Professor of Social Science, Professor of Political Science, and Director of the Weidenbaum Center on the Economy, Government, and Public Policy at Washington University in St. Louis.

REVIEWS
"A largely unremarked but quite important change in Congress has been the precipitous decline in the use of conference committees since the 1970s. The authors skillfully unpack the causes and consequences of this important trend...The work delivers a broad institutional and systemic perspective valuable to all scholars of US national politics...Highly recommended."
--Choice Reviews
— Choice Reviews Online