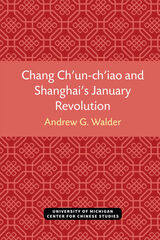 Shanghai’s January Revolution was a highly visible and, by all accounts, crucially important event in China’s Cultural Revolution. Its occurrence, along with the subsequent attempt to establish a “commune” form of municipal government, has greatly shaped our understanding both of the goals originally envisaged for the Cultural Revolution by its leaders and of the political positions held by the new corps of Party leaders thrust upward during its course—most notably Chang Ch’un ch’iao. At this interpretive level, the events in Shanghai seem to embody in microcosm the issues and conflicts in Chinese politics during the Cultural Revolution as a whole, while at the same time shaping our conception of what these larger issues and conflicts were. At the more general, theoretical level, however, the events in Shanghai provide us with an unusual opportunity (thanks to Red Guard raids on Party offices) to view the internal workings of the Party organization under a period of stress and to observe unrestrained interest group formation and mass political conflict through the press accounts provided by these unofficial groups themselves. The January Revolution thus provides us with an opportunity to develop better our more abstract, theoretical understanding of the functioning of the Chinese political system and the dynamics of the social system in which it operates. [1]
AUTHOR BIOGRAPHY
Andrew G. WALDER is Denise O'Leary and Kent Thiry Professor in the School of Humanities and Sciences.
TABLE OF CONTENTS
Cover
Title
Copyright
Contents
Preface
Abbreviations
I. Introduction
II. Chang Ch'un-ch'iao's Political and Organizational Background
Ts'ao Ti-ch'iu's Political and Organizational Background
III. The Cultural Campaign: May-August 1966
IV. Ts'ao Ti-ch'iu and the Early Red Guard Movement in Shanghai
Shanghai Red Guard Opposition to the MPC
The Spiral of Conflict: Peking Red Guards Enter Shanghai
Internal MPC Debates about Dissident Red Guards
Mao's Self-Clarification: The October Party Work Conference
V. The Central Dilemma: Revolution and Production
Workers Enter the Cultural Revolution--The Anting Incident
The MPC's Arguments against Worker Organizations
The Development of Mass Factionalism and the Paralysis of Municipal Government
The "Liberation Daily" Incident and the Polarization of Factions
Ts'ao's Abdication and the Development of Anarchy
Sources of Popular Discontent
The Worker-Peasant System
Youth Mobilization System
Apprentices
Sent-down Permanent Workers and Suburban Peasants
Permanent Workers
Food, Commodity Shortages and Increased Unemployment
CCRG Decision of December 26
The Scarlet Exodus and General Strike
The Effects of Economism
VII. Chang Ch'un-ch'iao and the January Revolution
Stage One--Establishing a Rationale for Action
Stage Two--Strike-Breaking and Political Organizing
The Deterioration of Chang's Mass Support
Stage Three--The Commune/Revolutionary Committee
VIII. Chang Ch'un-ch'iao and the Politics of Demobilization
Halting Attacks on Industrial and Administrative Cadres
Returning Students to School
Resolving the Issue of Worker Economic Demands
Restoring Order in Shanghai's Neighborhoods
Shanghai in the Summer of 1967
Interpretive Shifts
The January Revolution
Chang Ch'un-ch'iao and Chinese "Radicalism"
Organizational Structure and Political Conflict
Social Structure and Political Conflict
Chang Ch'un-ch'iao and the Politics of Social Change
Chronology of Events
Notes
Sources
REQUEST ACCESSIBLE FILE