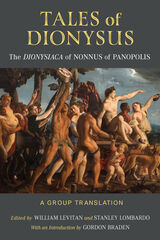 Tales of Dionysus is the first English verse translation of one of the most extraordinary poems of the Greek literary tradition, the Dionysiaca of Nonnus of Panopolis. By any standard, the Dionysiaca is a formidable work. It is by far the longest poem surviving from the classical world, a massive mythological epic stretching to over 20,000 lines, written in the tradition of Homer, using Homer’s verse, Homer’s language, his narrative turns and motifs, and invoking his ancient Muses. But it is also the last ancient epic to follow a Homeric model, composed so late in fact that it stands as close in time to the Renaissance as it does to archaic Greece. Like its titular hero, Dionysus, with his fluidity of forms, names, and divine incarnations, the poem itself is continually shifting shape. Out of its formal epic frame spills a tumult of ancient literary types: tragedy, elegy, didactic, panegyric, pastoral idyll, and the novel are all parts of this gigantic enterprise, each genre coming to the fore one after the other.

Tales of Dionysus brings together forty-two translators from a wide range of backgrounds, with different experiences and different potential relationships to the text of Nonnus’ poem. All work in their own styles and with their own individual approaches to the poem, to translation, and to poetic form. This variety turns Tales of Dionysus into a showcase of the multiple possibilities open to classical translation in the contemporary world.

Stanley Lombardo is Professor Emeritus of Classics at The University of Kansas.

“This is an excellent project, one that may bring a long-deserved audience to one of the great poets of the Greek world.”
—Benjamin Acosta-Hughes, The Ohio State University

Summary of the Poem