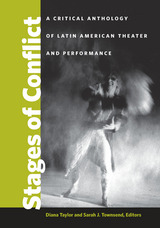 "A most welcome and needed collection . . . Not only is it the first English-language anthology of theater and performance in Latin America from the Conquest onward, but it also includes excellent introductory and background material . . . certain to become an essential source book."
---Marvin Carlson, City University of New York

"A rich resource for teachers and students, and for everyone intrigued by the history of performing Latin America . . . Diana Taylor and Sarah Townsend locate an animating tension between indigenous and colonial performance practices, and between the irreducibly local character of performance and the insistent pressure---as visible in the sixteenth century as in the twenty-first---of a globalizing, often oppressive modernity."
---W. B. Worthen, Barnard College, Columbia University

Stages of Conflict brings together a vast array of dramatic texts, ambitiously tracing the intersection of theater and social and political life in the Americas over the past five centuries. Including eighteen works faithfully translated into English, the collection moves from a sixteenth century Mayan dance-drama to a 2003 production by the first published indigenous playwright in Mexico. Historical pieces from the sixteenth century to the present highlight the encounter between indigenous tradition and colonialism, while contributions from modern playwrights such as Virgilio Pinero, Jose Triana, and Denise Stolkos take on the tumultuous political and social upheavals of the past century.

The editors have added comprehensive critical commentary that details the origins of each play, affording scholars and students of theater, performance studies, and Latin American studies the opportunity to view the history of a continent through its rich and diverse theatrical traditions.

Diana Taylor is Director of The Hemispheric Institute of Performance and Politics and Professor of Performance Studies and Spanish at New York University. Her books include the award-winning volume The Archive and the Repertoire: Performing Cultural Memory in the Americas.