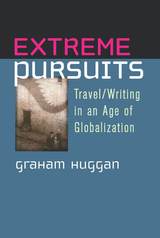 Recent figures suggest that there will be 1.6 billion arrivals at world airports by the year 2020. Extreme Pursuits looks at the new conditions of global travel and the unease, even paranoia, that underlies them---at the opportunities they offer for alternative identities and their oscillation between remembered and anticipated states. Graham Huggan offers a provocative account of what is happening to travel at a time characterized by extremes of social and political instability in which adrenaline-filled travelers appear correspondingly determined to take risks. It includes discussions of the links between tourism and terrorism, of contemporary modes of disaster tourism, and of the writing that derives from these; but it also confirms the existence of more responsible forms of travel/writing that demonstrate awareness of a chronically endangered world.

Extreme Pursuits is the first study of its kind to link travel writing explicitly with structural changes in the global tourist industry. The book makes clear that travel writing can no longer take refuge in the classic distinctions (traveler versus tourist, foreigner versus native) on which it previously depended. Such distinctions---which were dubious in the first place---no longer make sense in an increasingly globalized world. Huggan argues accordingly that the category "travel writing" must include experimental ethnography and prose fiction; that it should concern itself with other kinds of travel practices, such as those related to Holocaust deportation and migrant labor; and that it should encompass representations of travelers and "traveling cultures" that appear in popular media, especially TV and film.