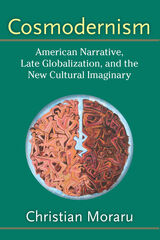 "Christian Moraru is an especially dynamic and brilliant scholar who works at a high level of critical and theoretical sophistication. I've never seen anything quite so exhaustive, so magisterial. Readers of Cosmodernism will think of the Keats line about an astronomer's exhilaration when a new planet swims into his ken."
---David Cowart, University of South Carolina

"Cosmodernism has the potential to become foundational for the study of a whole period. Christian Moraru undertakes here to establish a new basis for thinking about the era of cultural history in which we have found ourselves, in the United States but also around the world, since the end of the Cold War. The strength of Moraru's work lies in its intellectual ambition and scope; its polymathic range and breadth of learning; its confident mastery of a variety of disciplinary discourses; its fresh and thoughtful selection of texts for discussion; the sharpness and insight of its textual analyses; and, animating everything, its fervent commitment to a new and better way of understanding our relationship to others and the world at large."
---Brian McHale, The Ohio State University

A sweeping inquiry into post–Cold War American literature and theory, Cosmodernism argues, cautiously but persuasively, for the rise of a new cultural paradigm against the backdrop of accelerating globalization. Moraru calls this paradigm "cosmodern." He uses the term to account for what seems to be gradually challenging the postmodern over the last twenty-odd years. Not so much a well-structured movement yet, cosmodernism is chiefly a critical construct enabling Moraru to articulate representative literary-theoretical interventions of the past two decades into a reasonably coherent model. The coherence inheres, he shows, in a certain "relational" imaginary, which the critic canvasses by placing a wide range of authors and works in, across, and against the material-conceptual networks of globalization, cosmopolitanism, modernism, postmodernism, postcolonialism, multiculturalism, and other areas of contemporary U.S. intellectual history.

Christian Moraru is Professor of English at the University of North Carolina, Greensboro. His latest books include Rewriting: Postmodern Narrative and Cultural Critique in the Age of Cloning (2001), Memorious Discourse: Reprise and Representation in Postmodernism (2005), and the edited collection Postcommunism, Postmodernism, and the Global Imagination (2009).