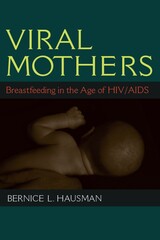 "Long overdue . . . Hausman's focus on cultural representation rather than real mothers and practices is savvy and strategic in removing the debates from personal stories and investments to the ways in which this volatile topic becomes embedded in cultural values, language, and imagery."
---Alison Bartlett, University of Western Australia

Viral Mothers: Breastfeeding in the Age of HIV/AIDS addresses modern fears of dangerous motherhood, focusing on preoccupations with mothers' bodies as vectors for infection and contamination. The book examines how the maternal body is perceived as a conduit for disease, drugs, or contaminants that end up in the body of an innocent---and pure---infant. Paying special attention to HIV transmission through breastfeeding, Viral Mothers examines ideologies of maternal embodiment that influence public health protocols and mothers' behaviors worldwide.

The medical community has known since the late 1980s that HIV is passed through breast milk from infected mothers to their babies. In highly industrialized countries, HIV-positive mothers are advised not to breastfeed their babies, but in poor countries breastfeeding has continued to be a predominant and medically recommended practice as a partial solution to problems of infant health and welfare in resource-poor contexts. Now, in areas of high rates of HIV infection and high infant mortality, decisions concerning infant feeding are, literally, about life and death. Public health debates concerning breastfeeding and HIV transmission must consider both the mortality associated with not breastfeeding and the possibility of HIV infection from mother to child.

The transmission of HIV through breastfeeding is a medical and public health issue that touches on and augments contemporary concerns about bodies, germs, and the environment. These concerns affect all people around the globe as we struggle with the meanings of health, risk, and embodiment in modernity. Viral Mothers addresses and explores the dense cultural meanings evoked by mothers' postnatal transmission of HIV. In so doing, the book pays special attention to fears of contamination and contagion that emerge as consequences of a medicalizing modernity. The main themes of the book---risk, purity, denial, and choice---define the terms through which the viral mother is constituted in discourse and enacted publicly as a set of identifiable, culturally legible, concerns.

Bernice L. Hausman is Professor of English at Virginia Tech. She is also the author of Mother's Milk: Breastfeeding Controversies in American Culture.