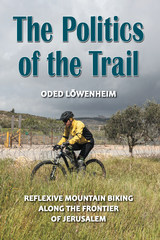 Each day, as Oded Löwenheim commutes by mountain bike along dirt trails and wadis in the hills of Jerusalem to Hebrew University, he feels a strong emotional connection to his surroundings. But for him this connection also generates, paradoxically, feelings and emotions of confusion and estrangement.

In The Politics of the Trail, Löwenheim confronts this tension by focusing on his encounters with three places along the trail: the separation fence between Israel and the Palestinians; the ruins of the Palestinian village Qalunya, demolished in 1948; and the trail connecting the largest 9/11 memorial site outside the U.S. with a top-secret nuclear-proof bunker for the Israeli cabinet. He shares the stories of the people he meets along the way and considers how his own subjectivity is shaped by the landscape and culture of conflict. Moreover, he deconstructs, challenges, and resists the concepts and institutions that constitute such a culture and invites conversation about the idea of conflict as a culture.

AUTHOR BIOGRAPHY
Oded Löwenheim is Senior Lecturer in the Department of International Relations at the Hebrew University of Jerusalem.

TABLE OF CONTENTS
Contents
Prologue: Losing Traction in the Hills of Jerusalem
Introduction. Mountain Biking in the Frontier of Jerusalem: An Exploration of External and Internal Landscapes of Conflict
Chapter 1. Mortal Danger: Two Rides along the Separation Fence
Chapter 2. A Fence behind a Fence behind a Fence: Riding after the Unknown Soldiers and Looking for a Breach in the Fence
Chapter 3. Riding to Qalunya, Part I: Truing the Wheel of Time?
Chapter 4. Riding to Qalunya, Part II: L’Hôte
Chapter 5. The Last Ride (for the Meanwhile) in the Arazim Valley
Contradictions: Some Concluding Thoughts about The Politics of the Trail
Notes
Bibliography
Index
REQUEST ACCESSIBLE FILE