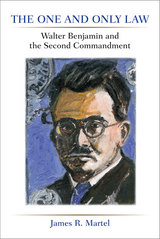 Walter Benjamin’s “Critique of Violence,” widely considered his final word on law, proposes that all manifestations of law are false stand-ins for divine principles of truth and justice that are no longer available to human beings. However, he also suggests that we must have law—we are held under a divine sanction that does not allow us to escape our responsibilities. James R. Martel argues that this paradox is resolved by considering that, for Benjamin, there is only one law that we must obey absolutely—the Second Commandment against idolatry. What remains of law when its false bases of authority are undermined would be a form of legal and political anarchism, quite unlike the current system of law based on consistency and precedent.


Martel engages with the ideas of key authors including Alain Badiou, Immanuel Kant, and H.L.A. Hart in order to revisit common contemporary assumptions about law. He reveals how, when treated in constellation with these authors, Benjamin offers a way for human beings to become responsible for their own law, thereby avoiding the false appearance of a secular legal practice that remains bound by occult theologies and fetishisms.
AUTHOR BIOGRAPHY
James R. Martel is Professor of Political Science at San Francisco State University. He is author of Textual Conspiracies: Walter Benjamin, Idolatry, and Political Theory(University of Michigan Press).
TABLE OF CONTENTS
Contents
Acknowledgments
Introduction: A Slight Adjustment
One. The One and Only Law
Two. The Law of the Break with Law: Badiou and Legal Ethics
Three. Raving with Reason: Kant and the Moral Law
Four. A “Useful Illusion”: H. L. A. Hart and Legal Positivism
Five. The Haitian Revolution: One Law in Action
Conclusion: How Lawful Is One Law?
Notes
Bibliography
Index
REQUEST ACCESSIBLE FILE