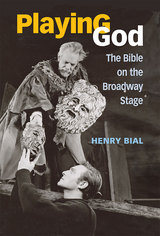 Whether we regard it as the collected inscriptions of an earlier oral tradition or as the divinely authored source text of liturgical ritual, the Bible can be understood as a sacred performance text, a framework for an instructional theater that performs the shared moral and ethical values of a community. It’s not surprising, then, that playwrights have turned to the Bible as a source for theatrical adaptation. Biblical texts have inspired more than 100 Broadway plays and musicals, ranging from early spectacles like Ben-Hur (1899) to more familiar works such as Godspell and Jesus Christ Superstar. What happens when a culture’s most sacred text enters its most commercial performance venue?


Playing God focuses on eleven financially and/or critically successful productions, as well as a few notable Broadway flops that highlight the difficulties in adapting the Old and New Testaments for the stage. The book is informed by both performance studies and theater history, combining analysis of play-scripts with archival research into the actual circumstances of production and reception. Biblical plays, Henry Bial argues, balance religious and commercial considerations through a complex blend of spectacle, authenticity, sincerity, and irony. Though there is no magic formula for a successful adaptation, these four analytical lenses help explain why some biblical plays thrive while others have not.

AUTHOR BIOGRAPHY
Henry Bial is Professor of Theatre and Director of the School of the Arts, University of Kansas. His previous books include Theater Historiography: Critical Interventions (co-edited with Scott Magelssen); Acting Jewish: Negotiating Ethnicity on the American Stage and Screen; and The Performance Studies Reader.