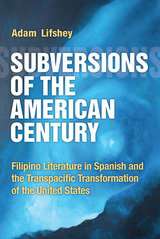 Subversions of the American Century: Filipino Literature in Spanish and the Transpacific Transformation of the United States argues that the moment the United States became an overseas colonial power in 1898, American national identity was redefined across a global matrix. The Philippines, which the United States seized at that point from Spain and local revolutionaries, is therefore the birthplace of a new kind of America, one with a planetary reach that was, most profoundly, accompanied by resistance to that reach by local peoples.


Post-1898 Filipino literature in Spanish testifies crucially to this foregrounding fact of American global power, for it is the language of that tradition that speaks directly to the reality of one empire having wrested land from another. Yet this literature is invisible in American Studies programs, Asian Studies programs, Spanish and English departments, and everywhere else. Subversions of the American Century will change that. After Subversions, students and scholars in various American Studies disciplines as well as Asian, Spanish, and Comparative Literature fields will find it necessary to revisit and revamp the basic parameters by which they approach their subjects.