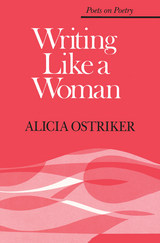 Writing Like a Woman
by Alicia Suskin Ostriker
University of Michigan Press, 1983
Paper: 978-0-472-06347-5
"'If we have the habit of freedom and the courage to write exactly as we think,' as Woolf puts it in A Room of One's Own, writing like a woman simply means writing like what one actually is, in sickness and health, richer and poorer, belly and bowels, the consonants and the vowels too. We may have a general sense that women poets are more likely than men, at the present time, to write in detail about their bodies; to take power relationships as a theme; to want to speak with a strong rather than a subdued voice; are less likely to seek distance, more likely to seek intimacy, in poetic tone. But generalization would be foolish here. 'Woman poet,' like 'American poet' or 'French poet' or 'Russian poet,' allows--even insists on--diversity, while implying something valuable in common, some shared language and life, of tremendous importance to the poet and the poet's readers." --Alicia Ostriker
TABLE OF CONTENTS