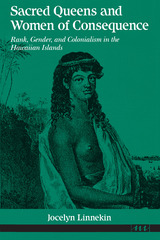 Sacred Queens and Women of Consequence is a pathbreaking examination of the contact encounter in Hawaii from the perspective of Hawaiian women. Jocelyn Linnekin offers a reconstruction of Hawaiian women's authority and status before contact with the West and examines changes in their cultural valuation and social position during the first century of Western contact. Through a detailed analysis of women's roles in exchange, production, kinship, and politics during the political and economic transformations of the nineteenth century, Linnekin challenges the view that Polynesian women were doomed to a peripheral status by the ritual logic of pollution. She demonstrates how Hawaiian women maintained their position as points of access to land and power, while frequently resisting the constraints of the tabu system as well as later Western-influenced attempts to abridge their authority.

This book is a unique and important contribution to the scholarship on Hawaiian history as well as to the growing literature on women and colonialism and women and social stratification. It will appeal to scholars and students who work in the areas of gender studies, social stratification, cultural change, Oceania, and historical anthropology.