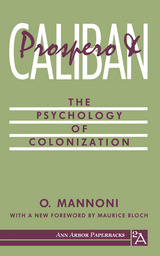 In his now classic volume Prospero and Caliban, Octave Mannoni gives his firsthand account of a 1948 revolt in Madagascar that led to one of the bloodiest episodes of colonial repression on the African continent. It is in Prospero and Caliban that Mannoni constructs the notion of the “dependency complex,” for which his book has since been remembered and widely discussed in both psychoanalytical and anthropological writing. Prospero and Caliban was one of the first books to challenge traditional approaches to the study of native American societies by Western colonizers and anthropologists; and Mannoni is recognized today for his close association with and influence on the French psychoanalyst Lacan.

Noted anthropologist Maurice Bloch has written a powerful and critical new foreword to the English translation, which allows the reader to view Mannoni’s unique work in its historical and intellectual context.
TABLE OF CONTENTS