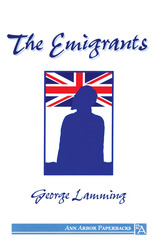 The Emigrants
by George Lamming
University of Michigan Press, 1994
Paper: 978-0-472-06470-0
The Emigrants is an elaborately conceived novel, dense with dynamic characters and evocative details. First published in 1954, it focuses initially on the emigrant journey, then on the settling-in process. The journey by sea and subsequent attempts at resettlement provide the fictional framework for Lamming's exploration of the alienation and displacement caused by colonialism.

This is the epic journey of a group of West Indians who emigrate to Great Britain in the 1950s in search of educational opportunities unattainable at home. Seeking to redefine themselves in the "mother country," an idealized landscape that they have been taught to revere, the emigrants settle uncomfortably in England's industrial cities. Within two years, ghettoization is firmly in place. The emigrants discover the meaning of their marginality in the British Empire in an environment that is unexpectedly hostile and strange. For some, alienation prompts a new sense of community, a new sense of identity as West Indians. For others, alienation leads to a crisis of confrontation with the law and fugitive status.

There is a wealth of information here about the genesis of the black British community and about the cultural differences between the black British and West Indian/Caribbean.
AUTHOR BIOGRAPHY
George Lamming has written seven books and has lectured as a visiting professor at some of the finest universities in the world. Barbados remains his home.

"The Emigrants very thought-provoking. It shows how adrift black people can be as they search for a political, economic and social context. It should also be read as an example of how black people have tried to use the novel to tell their own unique story in a unique way."
—Quarterly Black Review