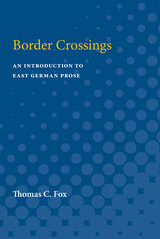 Border Crossings is an accessible and comprehensive overview of the work of prose fiction writers in what was the German Democratic Republic. Thomas C. Fox introduces readers to the best and most important East German writers—among them Christa Wolf, Jurek Becker, Anna Seghers, Stefan Heym, and Franz Fühmann—restricting his study to work that is available in English translation so that readers who do not know German will be able to read for themselves the literature he discusses. During a period of forty years, writers in the German Democratic Republic struggled with increasing success to free themselves from a smothering and paternalistic governmental embrace, thus anticipating, and helping to constitute, the events of 1989. In its relentless interrogation of the status quo, in its persistent ability to create alternatives, and in its call for more openness, literature in East Germany served as an outlet for energies and ideas that might have been channeled, in the West, into politics, philosophy, or journalism. In addition to discussing the role that literature played in shaping historical events, Fox shows that it can be appreciated simply as literature, outside of its political contexts.
REVIEWS
". . . [Fox's] comprehensive analysis of prose assures 'border crossings'; it helps readers comprehend what may otherwise be perceived as 'foreign,' that is, strange or impenetrable."
--Germanic Review
— Germanic Review

"With this timely analytical overview of East German prose works in English translation, Fox fills an important gap in the market place. Covering a time span of about forty years, the study discusses representative works by the most important GDR writers and their reception in East and West Germany and the United States."
--German Studies
— German Studies