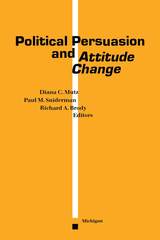 Political Persuasion and Attitude Change defines and introduces a new field of research, one that investigates the alteration of people's attitudes: when people can be moved, and when they cannot.
Each chapter synopsizes a major area of political persuasion and provides an update on the latest findings as well as overviews of past research in each area. Whole sections of the book center on the three major agents involved in the political persuasion process: the mass media, political elites, and individual citizens themselves.
Political Persuasion and Attitude Change boldly contradicts the received wisdom on the extent of mass media's influence on political attitudes and argues that the media's effects are indeed massive, rather than limited. It explores the impact of political elites on the persuasion process, and focuses on individual control over the persuasion process.
This volume is unique in that chapters address theoretical as well as methodological issues, simultaneously combining reviews of literature with the latest research findings. It will appeal to scholars and students interested in the study of political persuasion in contemporary politics across the disciplines of political science, psychology, sociology, and communications.
Part I. Mass Media and Political Persuasion. Contributors are Steven Ansolabehere and Shanto Iyengar; Joanne M. Miller and Jon A. Krosnick; and John Zaller.
Part II. Persuasion by Political Elites. Contributors are James H. Kuklinski and Norman L. Hurley; Kathleen M. McGraw and Clark Hubbard; Lee Sigelman and Alan Rosenblatt.
Part III. Individual Control of the Political Persuasion Process. Contributors are Steven H. Chaffee and Rajiv Rimal; Dennis Chong; Gregory Andrade Diamond and Michael D. Cobb; Jeffrey Mondak, Diana C. Mutz, and Robert Huckfeldt.
Diana C. Mutz is Associate Professor of Political Science and Mass Communications, University of Wisconsin, Madison. Paul M. Sniderman is Professor of Political Science, Stanford University. Richard A. Brody is Professor Emeritus of Political Science and Communications, Stanford University.
REVIEWS
"This is not just an excellent source of information and ideas for other researchers and students of political persuasion, it is a valuable source of enlightenment for all researchers. Politicians and their handlers should be required to read this impressive volume."
—Choice
— Choice