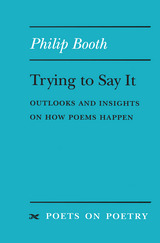 As one of Robert Frost's last students, Philip Booth has for more than four decades written poems prized for their clarity and depth. As founder of the Syracuse University Creative Writing Program, he has been a crucial influence in the early stages of such individually distinguished poets as Thomas Centolella, Stephen Dunn, Carol Frost, Brooks Haxton, Larry Levis, Jane Mead, Jay Meek, Susan Mitchel, Barbara Moore, and Lucia Perillo. The New York Times Book Review has said that "anyone who cares about poetry knows his work."
Gathering together selections from his notebooks, dreamlogs, memoirs, and essays of such poets as Frost, Robert Lowell and George Oppen, Trying to Say It particularly focuses on the ways that the tension between in-formed structures and lineation create poems which--in all senses--move.
Employing the Thoreauvian sense of place for which his poetry is known, Booth probes the nature of poetry itself, as well as the poetry of nature--yielding insights that are rooted in the acute observation that catalyzes imagination. Infused with a restless spirit in search of a moving language commensurate with the complexity of being fully alive, the essays collected in Trying to Say It reveal the pulses of a teacher's mind and a poet's heart.
Philip Booth is the author of nine books of poetry, and has been honored by Guggenheim, Rockefeller, and National Endowment for the Arts fellowships, the National Institute of Arts and Letters, and the Academy of American Poets.
REQUEST ACCESSIBLE FILE