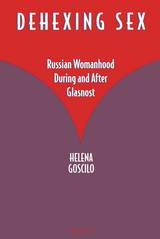 Glasnost and the collapse of the Soviet Union revolutionized Russian society. What effects, however, did they have on the status, role, and image of women in Russian culture? Examining the past turbulent decade of transition to "democracy" and a market economy, Dehexing Sex traces the ways in which Russia's concept of womanhood both changed and remained the same, taking into account dominant ideologies and social philosophies, sociopolitical organizations, women's writings, literary criticism, film, and popular cultural forms such as pornography.
The lively, engaging chapters of this book examine texts by contemporary women writers in the context of the political, social, economic, biological, psychological, and aesthetic transformations that helped define them. Goscilo reveals that the Russian cultural revolution has reshaped the female image in varied and often contradictory ways. While increased interaction with the West fostered gender awareness, it also introduced imported Western sexist practices--especially the exploitation of female bodies--formerly proscribed by a puritanical censorship. Popular magazines, newspapers, and television propagated the image of woman as mother, ornament, and sexual object, even as women's fiction conceived of womanhood in complex psychological terms that undermined the gender stereotypes which had ruled Soviet thinking for more than 70 years.
With the aid of feminist and cultural theory, Dehexing Sex investigates the overt and internalized misogyny that combined with the genuinely liberalizing forces unleashed by Gorbachev's policy of glasnost and perestroika. It exposes Russia's repressive romance with womanhood as a metaphor for nationhood and explores Russian women's ironic recasting of national mythologies.
"Impressive . . . an important contribution to Russian studies and to women's studies. The author is an outstanding scholar, an energetic and original thinker, and her writing sparkles with imagination and wit." --Stephanie Sandler, Amherst College
Helena Goscilo is Associate Professor and Chair of Slavic Languages and Literatures, University of Pittsburgh.
REQUEST ACCESSIBLE FILE