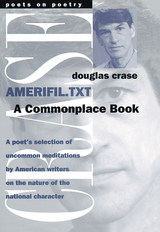 From its title forward, AMERIFIL.TXT is an unusual book. The title, unpacked like a computer filename and pronounced "Amerifile Text," reveals the book's beguiling proposition: that the answer to the question of what it means to be an American lies not on television talk shows nor within think tanks but within American memory itself. The virtue of this "Amerifile" is to demonstrate that such memory exists, in texts ready to access as if they were digital entries in an online commonplace book.
The twenty-three American writers who appear in the book range chronologically from the colonial thinker John Wise to the contemporary poet John Ashbery. Their appearances are arranged to comment almost interactively on identifiable American issues like "Doing Your Thing," "How Writing Is Written," "Pursuit of Happiness," and "Right to Privacy." Douglas Crase has said that he finds rearrangement morally and artistically more interesting than opinions, as rearrangement involves choice and commitment, while opinions are only held. In the end, readers may conclude that Amerifil.Txt is not a commonplace book at all, but rather a spiritual autobiography of its compiler.
Douglas Crase is a widely anthologized poet, essayist, and critic. His acclaimed volume of poetry The Revisionist earned nominations for the National Book Critics Circle Award and the American Book Award in poetry. He has received an Ingram-Merrill Award, a Whiting Writer's Award, and fellowships from the MacArthur and Guggenheim foundations and the American Academy and Institute of Arts and Letters.
REQUEST ACCESSIBLE FILE