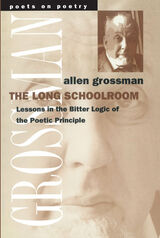 Allen Grossman's combined reputation as a poet and as a professor of poetry gives him an unusual importance in the landscape of contemporary American poetry. In this new collection Grossman revisits the "Long Schoolroom" of poetic principle--where he eventually learned to reconsider the notion that poetry was cultural work of the kind that contributed unambiguously to the peace of the world.
The jist of what he learned--of what his "lessons" taught him--was (in the sentence of Oliver Wendell Holmes): "Where most men have died, there is the greatest interest." According to Grossman, violence arises not merely from the "barbarian" outside of the culture the poet serves, but from the inner logic of that culture; not, as he would now say, from the defeat of cultural membership but from the terms of cultural membership itself.
Grossman analyzes the "bitter logic of the poetic principle" as it is articulated in exemplary texts and figures, including Bede's Caedmon and Milton. But the heart of The Long Schoolroom is American, ranging from essays on Whitman and Lincoln to an in-depth review of the work of Hart Crane. His final essays probe the example of postmodern Jewish and Christian poetry in this country, most notably the work of Robert Lowell and Allen Ginsburg, as it searches for an understanding of "holiness" in the production and control of violence.
Allen Grossman is author of The Ether Dome and Other Poems: New and Selected, The Sighted Singer: Two Works on Poetry for Readers and Writers (with Mark Halliday), and most recently, The Philosopher's Window. He is Mellon Professor in the Humanities at The Johns Hopkins University.
TABLE OF CONTENTS
Contents
My Caedmon: Thinking about Poetic Vocation
Orpheus/Philomela: Subjection and Mastery in the Founding Stories of Poetic Production
Milton's Sonnet "On the Late Massacre in Piemont": The Vulnerability of Persons in a Revolutionary Situation
The Poetics of Union in Whitman and Lincoln: An Inquiry toward the Relationship of Art and Policy
Hart Crane and Poetry: A Consideration of Crane's Intense Poetics with Reference to "The Return"
The Poetry of Robert Lowell
The Jew as an American Poet: The Instance of Ginsberg
Jewish Poetry Considered as a Theophoric Project
Nuclear Violence, Institutions of Holiness, and the Structures of Poetry
Holiness
Fragment of an Autumn Conversation between Allen Grossman and Daniel Morris on the Question of Another Logic
REQUEST ACCESSIBLE FILE