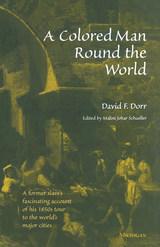 This remarkable book, written by former slave David F. Dorr, published in the mid-nineteenth century and only recently rediscovered, is an uncommon travel narrative. In the 1850s Dorr accompanied Louisiana plantation owner Cornelius Fellowes on a tour of the world's major cities, with the promise that when they returned to the United States, Dorr would be given his freedom. When that promise was broken, Dorr escaped to Ohio and wrote of his experiences in A Colored Man Round the World.
Malini Johar Schueller has edited and annotated the 1858 text and added a critical introduction that provides a useful context for understanding and appreciating this important but heretofore neglected document. Her edition of A Colored Man Round the World provides a fascinating account of Dorr's negotiation of the conflicting roles of slave versus man, taking into account all of the racial complexities that existed at the time. As a traveler abroad, Dorr claimed an American selfhood that allowed him mobility in Europe, and he benefited from the privileges accorded American "Orientalists" venturing in the near East. However, any empowerment that Dorr experienced while a tourist vanished upon his return to America.
The book will be welcomed for the rare perspective it provides of the mid-nineteenth century, through the eyes of an African-American slave and for the light it casts on world and U.S. history as well as on questions of racial and national identity.
Malini Johar Schueller is Professor of English, University of Florida.
REVIEWS

". . . Dorr's use of travel narrative conventions turns concepts of slavery and freedom on their heads and invites new readings of this venture into a genre from which blacks were largely absent in the 19th century. A rare work, ably edited. . . ."
—Library Journal, July 1999

"Laconic, funny, literate, sharply observant...Dorr’s writing speaks as loudly to our century as to his."
--AramcoWorld
— AramcoWorld