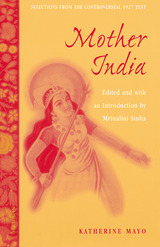 Mother India, a polemical attack against Indian self-rule written by U.S. historian Katherine Mayo, was met with a storm of controversy when it was published in 1927. The controversy generated still reverberates and thus is still worth revisiting, some fifty years after Indian independence. In responding to Mayo's argument laid out in Mother India, the leaders of the national movement and the independent women's movement in India laid the foundations of an alliance that gave modern Indian nationalism its distinctive character.
Mrinalini's Sinha's edition provides selections of this controversial book and commentary on the Mother India phenomenon. It also reprints a range of responses from Mayo's contemporaries. Sinha's edition works to locate the book and the controversy it incited in the context of U.S. domestic, British Imperial, and Indian nationalist politics. Unlike previous editions, Sinha's examines the history of cultural feminisms and the relations between women's movements in the United States, Britain, and India; the examination of these different movements reveals intriguing insights into the nature of the varied reactions to Mayo's book. The edition includes several formerly obscure contemporary responses to Mother India from representatives of the women's movement and of the anti-caste movement in India.
Intended as a tool for students and teachers alike, this book will be an important text in the field of women's studies, cultural studies, political science, history, and religion, among others.
Mrinalini Sinha is Associate Professor of History, Southern Illinois University. She is the author of Colonial Masculinity: The 'Manly Englishman' and the 'Effeminate Bengali' in the Late Nineteenth Century.
REQUEST ACCESSIBLE FILE