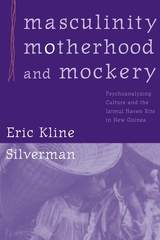 Masculinity, Motherhood, and Mockery analyzes the relationship between masculinity and motherhood in an Eastern Iatmul village along the Sepik River in Papua New Guinea. It focuses on a metaphorical dialogue between two countervailing images of the body, dubbed by literary theorist Mikhail Bakhtin as the "moral" and the "grotesque." Eastern Iatmul men in Tambunum village idealize an image of motherhood that is nurturing, sheltering, cleansing, fertile, and chaste--in a word, moral. But men also fear an equally compelling image of motherhood that is defiling, dangerous, orificial, aggressive, and carnal--hence, grotesque. Masculinity in Tambunum is a rejoinder both subtle and strident, both muted and impassioned, to these contrary, embodied images of motherhood.
Throughout this work, Eric Silverman details the dialogics of mothering and manhood throughout Eastern Iatmul culture, including in his analysis cosmology and myth; food- and childraising; architecture and canoes; ethnophysiology and sexuality; shame and hygiene; marriage and kinship; and perhaps most significantly, a ceremonial locus classicus in anthropology: the famous Iatmul naven rite. This book provides the first sustained examination of naven since Bateson, presenting new data and interpretations that are based entirely on original, first-hand ethnographic research.
The sustained engagement with anthropological and psychoanalytic theory coupled with a refreshing examination of a famous and still-enigmatic ritual is sure to make multiple contributions to pressing debates in contemporary anthropology and social theory.
Eric Silverman is Associate Professor of Anthropology, DePauw University.
TABLE OF CONTENTS