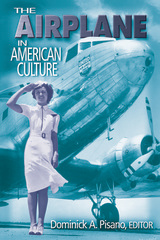 Few journeys have had as great an impact on American culture as Orville Wright's first flight at Kitty Hawk in 1903&mdash;a twelve-second, one-hundred-twenty-foot trip that has captivated American thought and influenced American life ever since.
Although countless books for aviation buffs have appeared since World War II, none has attempted to place the airplane in its full social, cultural, and interdisciplinary context until now. The first book of its kind, The Airplane in American Culture presents essays by distinguished contributors including historians, literary scholars, scholars of American studies, art historians, and museum professionals that explore a range of topics, including the connections between flying and race and gender; aviation's role in forming perceptions of the landscape; the airplane's significance to the culture of war; and the influence of flight on literature and art.
A must-read collection for anyone fascinated by the airplane, The Airplane in American Culture represents a dramatic new approach to writing the history of aviation, and makes an important contribution to American social and cultural history.
Dominick A. Pisano is Curator of the Aeronautics Department at the National Air and Space Museum, Smithsonian Institution.
REVIEWS
"Professional historians and to hers will find this volume valuable. Especially useful to nonspecialists are the editor's contributions of an essay on the historiography of aviation history and the concise bibliographic essay that concludes the book. A publication for serious students of aviation and its history."
--- Choice


". . . a long-overdue study in the field of aviation history. . . . [W]ell worth reading for anyone with an interest in the history of aviation. It would be extremely useful in any course on the history of aviation, and also could contribute significantly to courses such as military history and modern American history. For scholars in the field, this work offers not only some valuable historical perspective on aviation, but also some invaluable insights into possibilities for future study."
--- Journal of Military History