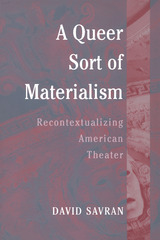 In engaging, accessible prose, leading theater critic and cultural commentator David Savran explores the intersections between art and culture, offering smart, compelling interpretations of the economic and social contexts of theatrical texts and practices. Acknowledging theater's marginal status in U.S. culture, A Queer Sort of Materialism takes on "the trouble-makers--the ghost, closeted homosexual, masochist, drag king, Third World laborer, even the white male as victim"--who figure more prominently in theater than in other cultural forms. In impeccably researched and argued essays that range in subject matter from Rodgers and Hammerstein to Paula Vogel, from Suddenly Last Summer to Iron John, Savran uncovers the ways that such troublemakers both challenge and reinforce orthodox social practices.
The selections presented here are by turns entertaining, informative, sophisticated, and polemical, reflecting the author's dual citizenship as rigorous scholar and engaging theater critic. This book also provides a model for a kind of queer historical materialism that will prove useful to a wide range of disciplines, including theater and performance, gender and sexuality, queer/gay/lesbian/transgender studies, American studies, and popular culture.
David Savran is Professor of Theater, the Graduate Center, the City University of New York, and author of Cowboys, Communists, and Queers and Taking It Like a Man.
TABLE OF CONTENTS