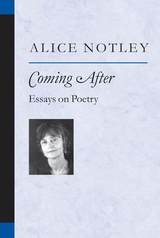 Notley explores the work of second-generation New York School poets and their allies: Ted Berrigan, Anne Waldman, Joanne Kyger, Ron Padgett, Lorenzo Thomas, and others. These essays and reviews are among the first to deal with a generation of poets notorious for their refusal to criticize and theorize, assuming the stance that "only the poems matter." The essays are characterized by Notley's strong, compelling voice, which transfixes the reader even in the midst of professional detail. Coming After revives the possibility of the readable book of criticism.
TABLE OF CONTENTS