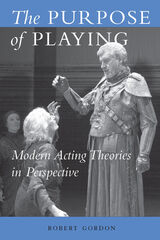 The Purpose of Playing providesthe first in-depth introduction to modern critical acting, enabling students, teachers, and professionals to comprehend the different aesthetic possibilities available to today’s actors. The book presents a comparative survey of the major approaches to Western acting since the nineteenth century, their historical evolution, and their relationship to one another. Author Robert Gordon explores six categories of acting: realistic approaches to characterization (Stanislavski, Vakhtangov, Strasberg, Chekhov); the actor as a scenographic instrument (Appia, Craig, Meyerhold); improvisation and games (Copeau, Saint-Denis, Laban, Lecoq); political theater (Brecht, Boal); exploration of the self and other (Artaud, Grotowski); and performance as cultural exchange (Brook, Barba). The synthesis of these principal theories of dramatic performance in a single text offers practitioners the knowledge they need to contextualize their own practice within the wider field of performance, while encouraging theorists and scholars to be more sensitive to the material realities of artistic practice.

“This analysis of major movements and figures from the early nineteenth century to the present is clear, thorough, and penetrating, and its scope across periods, countries, and styles is impressive.”
--Xerxes Mehta, University of Maryland-Baltimore County