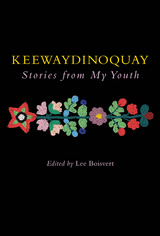 In the captivating art of the oral tradition-told in the author's own voice-Keewaydinoquay, Stories from My Youth brings to life the childhood years of a Michigan woman of both Native American and white. Presented here with the clarity and charm of a master storyteller, the words of Keewaydinoquay contain layers of understanding, conveyed by both what is said and how it is said. The values of the worldview that she shares with us are ones that resonate on far more than just an intellectual level.

The stories span generations and cultures and shed a rare light on the living conditions of Native Americans in Michigan in the early 1900s. They recount Keewaydinoquay's education in the public schools, illuminate the role Christianity played in Native American culture, and reveal the importance of maintaining traditional customs.

Keewaydinoquay was one of the very few Native American women who was steeped both in the ancient folkways of her people as well as erudite in the American university system. Ultimately she wove her native tradition and university learning together into a unique perspective that helped people understand the importance of nature and the human spirit.

Keewaydinoquay Peschel was Lecturer of Ethnobotany and Philosophy of the Western Great Lakes Indians at the University of Wisconsin. She is the author of several books, including Blue Berry: First Fruit of the Anishinaabeg. She passed over in 1999. Lee Boisvert attended the University of Michigan as a member of the Residential College from 1967 to 1969, and was awarded a Bachelor in Science in Sociology with double minors in Native American Studies and Gerontology by Central Michigan University in 1993.
TABLE OF CONTENTS