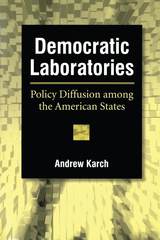 "Observers have long marveled at the spread of ideas and policies from state to state in American democracy. But why and how do politicians, professionals, and citizens in one state take inspiration from national policy debates and imitate, resist, and rework legislative models from other states? For the first time in this important new book, Andrew Karch analyzes in depth the process of policy 'diffusion' across the states, offering a nuanced and powerful framework to explain one of the most important and recurrent features of U.S. politics."
---Theda Skocpol, Victor S. Thomas Professor of Government and Sociology, Harvard University

"Karch does two things with remarkable skill. First, he makes sense of the copious literature on policy diffusion and extends that literature in a very fruitful way. Second, he conducts the most thorough and methodologically sound empirical study of policy diffusion to date, using both qualitative and quantitative analysis. This book is so well written and thoughtful that it will likely stimulate a whole new wave of study of state policy and its diffusion."
---Chris Mooney, editor of State Politics and Policy Quarterly

"Democratic Laboratories goes beyond standard 'diffusion of innovation' approaches to analyze the complex interaction of interstate and intrastate political forces that shapes policy change. The book is a major contribution to the study of American federalism---and a very good read."
---Kent Weaver, Brookings Institution

"Andrew Karch has something new and important to say about the states as laboratories of democracies. In his masterful account we learn about the actual process of diffusion of recent health and welfare policy reforms. "

"Democratic Laboratories is the seminal work on policy diffusion among the American states. Rigorously designed and well written, it is the new starting place for anyone interested in this important topic. The findings are copious and loaded with insights into the future of this valuable research."

Andrew Karch is Assistant Professor of Government at the University of Texas at Austin.

REVIEWS
"Karch offers an accessible but excellent read for public policy and state politics scholars at all levels. The book is an easy fit for most upper-division and graduate-level public policy courses."---Donald P. Haider-Markel, Political Science Quarterly