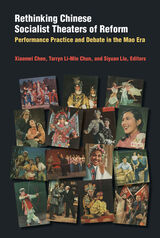 The profound political, economic, and social changes in China in the second half of the twentieth century have produced a wealth of scholarship; less studied however is how cultural events, and theater reforms in particular, contributed to the dynamic landscape of contemporary Chinese society. Rethinking Chinese Socialist Theaters of Reform fills this gap by investigating the theories and practice of socialist theater and their effects on a diverse range of genres, including Western-style spoken drama, Chinese folk opera, dance drama, Shanghai opera, Beijing opera, and rural theater. Focusing on the 1950s and ’60s, when theater art occupied a prominent political and cultural role in Maoist China, this book examines the efforts to remake theater in a socialist image. It explores the unique dynamics between official discourse, local politics, performance practice, and audience reception that emerged under the pressures of highly politicized cultural reform as well as the off-stage, lived impact of rapid policy change on individuals and troupes obscured by the public record. This multidisciplinary collection by leading scholars covers a wide range of perspectives, geographical locations, specific research methods, genres of performance, and individual knowledge and experience. The richly diverse approach leads readers through a nuanced and complex cultural landscape as it contributes significantly to our understanding of a crucial period in the development of modern Chinese theater and performance.
AUTHOR BIOGRAPHY
Xiaomei Chen is Distinguished Professor in the Department of East Asian Languages and Cultures at the University of California, Davis.

Tarryn Li-Min Chun is Assistant Professor in the Department of Film, Television, and Theatre at the University of Notre Dame.

Siyuan Liu is Associate Professor of Theatre at the University of British Columbia.
REVIEWS
“The contributors successfully offer a nuanced and complicated cultural landscape in which to critically engage with performance practice and debate during the construction of socialist theatres in the PRC. The book will find use in graduate seminars and upper-level undergraduate courses on Chinese theatre, China studies, Chinese cultural studies, and art and politics in general.”
—Xing Fan, University of Toronto
— Xing Fan