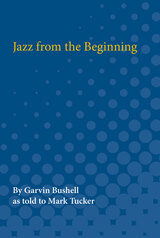 Few musicians can boast careers as long and productive as that of jazz instrumentalist Garvin Bushell. In Jazz from the Beginning, Bushell vividly recounts his musical experiences and reflects on some of the major personalities who shaped the history of jazz. Bushell's memoir vibrates with the excitement of being a part of the evolution of jazz. He began his career as a teenager, playing clarinet in a circus band. In the 1920s, he played gigs in rowdy Harlem cabarets and was a member of the Sam Wooding ensemble, one of the first black musical groups to tour Europe, Russia, and South America. In the 1930s, he performed with the big bands of Fletcher Henderson, Cab Calloway, and Chick Webb. In the 1950s and 1960s he participated in the Dixieland revival and in the modern experiments of Eric Dolphy and John Coltrane. Bushell also recalls with candor the scarring experiences of racial prejudice he encountered while touring America and Europe. Mark Tucker has carefully compiled Bushell's memoirs from a series of thirty-one taped interviews made in the summer of 1986. His text preserves Bushell’s warmth and personality and provides scholars and music lovers alike with a critical analysis of African-American music and an important record of seventy years of American musical history.