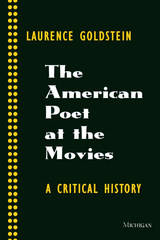 The American Poet at the Movies: A Critical History presents a series of case studies that shows how poets perceived the new technology of cinema as a rival threatening to their prestige, but also as a sister art deserving of encouragement. Each chapter places a key poem at the center and takes up the issues arising from the engagement of these two art forms, such as the poets' mixed feelings about living in a national culture dominated by visual media. Whether it is Hart Crane writing on Chaplin, Delmore Schwartz on Marilyn Monroe, Frank O'Hara on James Dean, or Louise Erdrich on John Wayne, poets have made sense of their own time by reference to film icons and values shared by all Americans thanks to the dream factory, Hollywood.
As an increasingly popular genre of modern poetry, and one that permits a unique view of this century's dominant art form, the movie poem has needed an explanatory book like this one. As cinema and television continue to wield extraordinary influence over the lives of all Americans, the efforts of poets to understand the visual culture will come to be appreciated as central to the task of modern and postmodern literature. This critical history is an important and timely contribution to the study of American literature and American institutions.
"One of the impressive things about the book is that while pursuing the seemingly narrow category of poems-about-movies, Goldstein is able to raise and illuminate virtually all the key issues surrounding the poetry of the period." - Roger Gilbert, Cornell University
". . . a discerning book, combining criticism and social history. It satisfies scholarly standards while appealing to general readers." - Philip French, coeditor of the Faber Book of Movie Verse
"In this work, [Goldstein] provides a new way of looking at American poets, both familiar and neglected. The approach is chronological and thematic, and films are seen from black, gay, Jewish, and feminist as well as middle-class white perspectives." Library Journal
Laurence Goldstein is editor of the Michigan Quarterly Review and Professor of English, University of Michigan.
REQUEST ACCESSIBLE FILE