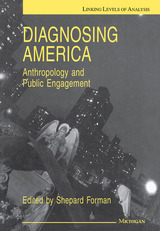 For years, anthropology has brought the lives and beliefs of "exotic" peoples to audiences in the West. Diagnosing America: Anthropology and Public Engagement reveals the power of anthropological description and analysis when applied to social, economic, and political problems in the contemporary United States and demonstrates the urgent need for this work.
Debunking the notion of anthropology as a "value-free" science, the authors argue forcefully for an anthropology expressly committed to cultural pluralism and democratic participation.
At the same time, individual essays demonstrate the applicability of standard anthropological methods to the study of contemporary U.S. society and culture as they investigate contested values, community politics, middle-class economics, and workplace culture or describe the psychophysiological stress effects of exclusion on African- Americans and the coping mechanisms of Mexican-Americans along the border.
Diagnosing America and the challenging "Statement to the Profession" that concludes it call for anthropologists to reach beyond the parochialism of their own discipline and to engage history, economics, sociology, and the policy sciences. It will be of interest to scholars in each of these fields who are concerned with the study and resolution of contemporary social problems in the United States and to students of American culture in this country and abroad.
Shepard Forman is Director of the International Affairs Program of the Ford Foundation and a former Professor of Anthropology, University of Michigan.
REQUEST ACCESSIBLE FILE