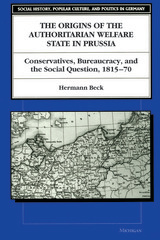 Prussia's social and political structure, institutions, and values were in many ways formative for German history after 1871. After unification Prussia accounted for roughly two-thirds of the empire's size and population, but its weight within Germany was even greater because Prussia in large part molded the German identity and shaped Germany's image abroad.
The Origins of the Authoritarian Welfare State in Prussia examines this Prussian/German identity. It investigates the complex traditions of ideas, institutions, and social policy measures that lay at the root of the conservative Prussian welfare state. The examination of the ideas and policies of Prussian officials brings out a peculiar welfare state mentality of benevolence and patriarchal concern, pervaded by authoritarian streaks, that was unique in nineteenth-century Europe. In addition, the study analyzes the historiographical implications of the question of continuity and discontinuity in German history.
The Origins of the Authoritarian Welfare State in Prussia is of interest to scholars and students of German history as well as to students of governmental social policy and of the workings of a welfare state.
Hermann Beck is Associate Professor of History, University of Miami.
AUTHOR BIOGRAPHY

Hermann Beck is Associate Professor of History, University of Miami.

REVIEWS
"Hermann Beck's study of the authoritarian welfare state in Prussia in the generation before 1870 is an interesting combination of intellectual, social, and political history. The book is well-researched, strategically utilizing some documents from the old German Central Archive in Merseburg but based primarily on the wealth of published primary sources that historians of nineteenth-century Germany must master."
—Eric Dorn Brose, American Historical Review
— Eric Dorn Brose, American Historical Review

"Yet another book on the Prussian bureaucracy? Yet, and a well-researched and well-written one raising new questions and using sources inadequately explored. [An] extended introduction on pauperism and the social question in Prussia between 1815 and 1870 . . . deserves to be read for its own sake . . . ."
—Loyd E. Lee, Central European History
— Loyd E. Lee, Central European History