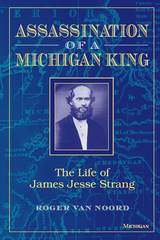 A skeptical follower of James Jesse Strang once wrote: "No man can serve two masters. You cannot serve a temporal king and a republican government at the same time. The thing is preposterous." And yet, under Strang, such a system survived in Michigan for six years. This book traces the life and assassination of King Strang, the extraordinary Mormon leader who, in the 1850s, created a literal kingdom on Beaver Island, in Lake Michigan.

As a young man, Strang was a dreamer of grandiose dreams---dreams of power, of royalty, and of fame. For him, the dreams came true. But in his pursuit of those dreams, Strang walked a tightrope to avoid ever-impending doom. Strang's kingdom flourished despite perennial conflicts with non-Mormons, including a gun battle with mainlanders, and despite a major prosecution by the federal government. His kingdom was designed to be totally independent of the state and nation. And yet, he was a shrewd political tactician who took advantage of Michigan law to be twice elected to the state legislature and become what one Detroit newspaper called the most powerful politician in the state.

Here is Strang the man of contrasts and contradictions, the strident opponent of polygamy and the husband of five wives, the astute editor and the incendiary propagandist, the prophet and the scoundrel, the man who through the sheer force of his personality made his followers a group to be feared in his region.

Vast amount of fresh information, including contemporary journals, documents, and letters never before used by biographers help draw a portrait of one of the most complex and resourceful leaders in American history.