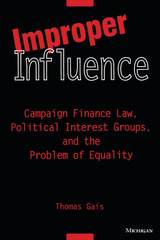 Why is there still so much dissatisfaction with the role of special interest groups in financing American election campaigns, even though no aspect of interest group politics has been so thoroughly regu-lated and constrained? This book argues that part of the answer lies in the laws themselves, which prevent many hard-to-organize citizen groups from forming effective political action committees (PACs), while actually helping business groups organize PACs.
Thomas L. Gais points out that many laws that regulate group involvement in elections ignore the real difficulties of political mobilization, and he concludes that PACs and the campaign finance laws reflect a fundamental discrepancy between grassroots ideals and the ways in which broadly based groups actually get organized.
". . . . of fundamental scholarly and practical importance. The implications for 'reform' are controversial, flatly contradicting other recent reform proposals . . . . I fully expect that Improper Influence will be one of the most significant books on campaign finance to be published in the 1990s." --Michael Munger, Public Choice
"It is rare to find a book that affords a truly fresh perspective on the role of special interest groups in the financing of U.S. elections. It is also uncommon to find a theoretically rigorous essay confronting a topic usually grounded in empirical terms. . . . Improper Influence scores high on both counts and deserves close attention from students of collective action, campaign finance law, and the U.S. political process more generally." --American Political Science Review
Thomas L. Gais is Senior Fellow, The Nelson A. Rockefeller Institute of Government, State University of New York.
TABLE OF CONTENTS
Contents
Figures
Tables
Abbreviations
Acknowledgments
1. Introduction
2. Collective Action, Institutions, and Bias in the PAC System
3. The Size and Scope of the PAC System
4. PAC Formation among Interest Groups: Incentives and Their Limits
5. PAC Formation among Interest Groups: Institutional Constraints
6. PAC's, Groups, and Public Policies
7. PAC's, Groups, and the Political Parties
8. Conclusions
Appendixes
A. Merged Data on Associations and PAC's: Sources, Procedures, and Descriptions
B. Coding PAC's according to Occupational Type: Data Sources and Coding Rules
C. Explanation of the Interactive Model of PAC Affiliation
Notes
Works Cited
Index
REQUEST ACCESSIBLE FILE