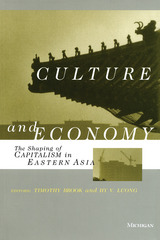 In recent years, most of the economies of Eastern Asia have been absorbed into global capitalism. Capitalism has transformed these economies, but the process has not been one-way. The cultures of Eastern Asia have in turn shaped how capitalism organizes labor, capital, and markets in ways that could not have been anticipated even ten years ago.
On the basis of rich empirical analyses of East and Southeast Asia, and with theoretical insights from different approaches in the social sciences, Culture and Economy addresses these issues in both macroscopic and microscopic terms. Specific topics discussed range from the use and reinvention of Confucian and Islamic legacies in South Korea and Malaysia to promote a particular vision of the economy, to the role of family- and network-structured firms and the reliance on trust-based personal networks in Southeast Asia, to the cultures of labor and management in Chinese village enterprises and Vietnamese ceramics firms, as well as in South Korean export processing zones and the current Chinese labor market.
These careful case studies suggest that it is inevitable that Eastern Asia will shape, even remake, capitalism into a system of production and consumption beyond its original definition.
Timothy Brook is Professor of History, Stanford University. Hy V. Luong is Professor of Anthropology, University of Toronto.
REQUEST ACCESSIBLE FILE