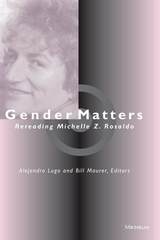 For the past twenty years, the work of Michelle Z. Rosaldo has had a profound impact on feminism and anthropology. Gender Matters commemorates her central role in shaping anthropological work and points toward new directions for critical inquiry based on a reconsideration of Rosaldo's theoretical and political interventions.
With the publication of Woman, Culture, and Society in 1974, Michelle Rosaldo initiated nothing less than a reconstruction of anthropology that placed feminist analysis at the center of the discipline. Through a rereading of Rosaldo's ideas and arguments, this collection provides in-depth analysis of Rosaldo's many contributions to anthropology and feminism. Each of the essays derives theoretically and politically useful insights from Rosaldo's work and sets them in motion for new intellectual and political practices. The authors do not always share Rosaldo's perspectives, nor do they necessarily agree with each other. But, together, they point to exciting syntheses of old and new feminist theory and practice.
Alejandro Lugo is Assistant Professor of Anthropology and Latina/o Studies, University of Illinois at Urbana-Champaign. Bill Maurer is Assistant Professor of Anthropology, University of California at Irvine.
REQUEST ACCESSIBLE FILE