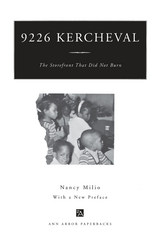 In honor of the thirtieth anniversary of its first publication, we are happy to reissue Nancy Milio's 9226 Kercheval, a groundbreaking book which analyzes the success of the Mom and Tots Center in urban Detroit in the late 1960s. At the time of its first publication, Robert Coles called the book "rare and extremely important" and remarked, "I can only hope that all those concerned with urban problems might read this unusual and inspiring book."
Milio adds a new Preface to update readers on the fate of the center and the issues of poverty and health care which continue today.
From the original Preface:
"This is the story of a venture in the ghetto, of the development of a ghetto health project which still lives, and of its meaning as I saw it as director. It is a tale told twice, in alternating sections: first as a factual account of events, then as a personal interpretation of those events--the story from the inside of the white outsider who was present. . . . The unfolding is literally and allegorically a story of involvement and change, the evolution of a new institution and of the people who made it. It is, in its parallel construction here, the public and private stories behind a benignly named storefront in a Detroit ghetto, the Mom and Tots Center, and of the inevitable intertwining of the two. . . . This book does say at least two things. First that health, as quality of life, as 'wholeness, unfolding,' must be mirrored in the process of undertakings intended to improve health. And that those who would involve others, especially the poor, in the process of healthful change, must themselves be involved: the one who would change others must himself be changed."
Nancy Milio is Professor of Health Policy and Administration and Professor of Nursing, University of North Carolina at Chapel Hill. She is also the author of Engines of Empowerment: Using Information Technology to Create Healthy Communities and Challenge Public Policy and Nutrition Policy for Food Rich Countries: A Strategic Analysis, among others.
TABLE OF CONTENTS
Contents
Focus
Prologue
I. Search for Coherence
II. Formation of a Matrix
III. Discovering the Possible
IV. Barriers
V. In the Balance
VI. Convulsion
VII. Strengthening the Matrix
VIII. Wholeness Unfolding
IX. Transition
Epilogue
Notes
REQUEST ACCESSIBLE FILE