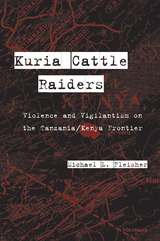 Kuria Cattle Raiders is about cattle raiding as practiced--both historically and in the present day--by the agro-pastoralist Kuria people, whose population straddles the border between Tanzania and Kenya. Based on field research conducted in the Tarime District lowlands of northern Tanzania, the book documents and analyzes an extraordinary transformation in the nature of Kuria cattle raiding that has occurred over the course of the past century. While in years past the raiding of other tribes and other Kuria clans was done for prestige and bridewealth cattle, today the practice is carried out by heavily armed multiclan and multiethnic gangs that are highly organized and cash market-oriented. This change, Michael Fleisher argues, is due to the penetration and evolution of the colonial economy into the region and the administrative policies of the post-colonial Tanzanian state.
The reciprocal raiding of cattle by pastoralists has a long and venerable history in East Africa, but there has been, until now, no book-length treatment of the practice, and, more importantly, no detailed case study of the newer, "modern" form of cattle raiding described here. In addition, the phenomenon of Kuria cattle raiding conveys significant implications for our understanding of informal economies and globalization processes.
Kuria Cattle Raiders engages issues of theoretical as well as practical significance for anthropologists, sociologists, criminologists, cultural ecologists, economic development agencies, and all those concerned with the pressing issues of globalization and rapid social and cultural change.
Michael L. Fleisher, a Post-Doctoral Research Fellow in the Department of Rangeland Resources, Utah State University, is currently engaged in a study of conflict among pastoralists in southern Ethiopia as part of a research project jointly administered by the University of Kentucky, Utah State University, and Cornell University under a grant from U.S.A.I.D.
REQUEST ACCESSIBLE FILE