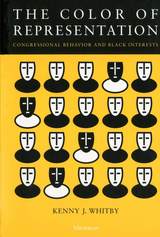 The central domestic issue in the United States over the long history of this nation has been the place of the people of color in American society. One aspect of this debate is how African-Americans are represented in Congress. Kenny J. Whitby examines congressional responsiveness to black interests by focusing on the representational link between African-American constituents and the policymaking behavior of members of the United States House of Representatives. The book uses the topics of voting rights, civil rights, and race- based redistricting to examine how members of Congress respond to the interests of black voters. Whitby's analysis weighs the relative effect of district characteristics such as partisanship, regional location, degree of urbanization and the size of the black constituency on the voting behavior of House members over time. Whitby explores how black interests are represented in formal, descriptive, symbolic, and substantive terms. He shows the political tradeoffs involved in redistricting to increase the number of African-Americans in Congress.
The book is the most comprehensive analysis of black politics in the congressional context ever published. It will appeal to political scientists, sociologists, historians, and psychologists concerned with minority politics, legislative politics, and the psychological, political, and sociological effects of increasing minority membership in Congress on the perception of government held by African Americans.
Kenny J. Whitby is Associate Professor of Political Science, University of South Carolina.
TABLE OF CONTENTS
Contents
1. Introduction: The Quality of Representation for African-Americans
2. Federal Protection of Voting Rights: The Role of Congress in the Black Struggle for the Franchise
3. The Quest for Equal Opportunity
4. The Color of Congress: The Impact of Race and the Role of Issues in Congressional Roll Call Votes
5. Racial Redistricting and the Representation of Black Interests
6. Epilogue: Black Policy Preferences, Congressional Behavior, and the Future of Representation for African-Americans
Appendixes
A. Description of Voting Rights Measures during Amending Phase
B. Description of Amendments
C. Description of Bills as They Appear in Table 14
Notes
References
Court Cases
Index
REQUEST ACCESSIBLE FILE