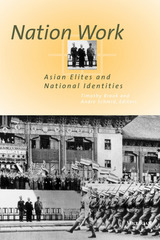 As increasing attention is drawn to globalization, questions arise about the fate of "the nation," a political and social unit that for centuries has seemed the common-sense way to organize the world. In Nation Work, Timothy Brook and André Schmid draw together eight essays that use historical examples from Asian countries--China, India, Korea, and Japan--to enrich our understandings of the origin and growth of nations.
Asia provides fertile ground for this inquiry, the volume argues, because in Asia the history of the modern nation has been inseparable from global influences in the form of Western imperialism. Yet, while the impetus for building a modern national identity may have come from the need to fashion a favorable place in a world system dominated by Western nations, those engaged in nationalist enterprises found their particular voices more often in relation to tensions within Asia than in relation to more generic tensions between Asia and the West.
With topics ranging from public health measures in nineteenth-century Japan through textual scholarship of Tamil intellectuals, the willful division of Korea's history from China's, the development of China's cotton industry, and the meaning of "postnational-ism" for Chinese artists, the essays reveal the fascinating array of sites at which nation work can take place.
This will be essential reading for historians and social scientists interested in Asia.
Timothy Brook is Professor of History, Stanford University. André Schmid is Assistant Professor of East Asian Studies, University of Toronto.
TABLE OF CONTENTS
Contents
Introduction: Nations and Identities in Asia / Timothy Brook and Andre Schmid
Constructing the National Body: Public Health and the Nation in Nineteenth-Century Japan / Susan L. Burns
Discourses of Empowerment: Missionary Orientalism in the Development of Dravidian Nationalism / V. Ravindiran
Decentering the “Middle Kingdom”: The Problem of China in Korean Nationalist Thought, 1895–1910 / Andre Schmid
Two Kinds of Nation, What Kind of State? / R. Bin Wong
Chen Gongbo and the Construction of a Modern Nation in 1930s China / Margherita Zanasi
Collaborationist Nationalism in Occupied Wartime China / Timothy Brook
The Incoherent Nation: An Exploration of Chinese “Postnationalism” / Xiaoping Li
Nation and Postnation in Japan: Global Capitalism and the Idea of National History / Thomas Keirstead
Bibliography
Contributors
Index
REQUEST ACCESSIBLE FILE