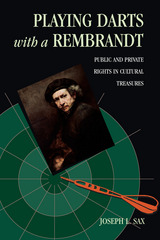 Some of the world's greatest treasures are hidden away and have not been seen publicly for decades, sometimes for centuries. Others have been destroyed. They are not stolen property. They are simply private property, and no matter their public significance, the public has no claims on them. A capricious owner of Leonardo da Vinci's notebook would be perfectly within his rights to throw it in the fireplace, as James Joyce's grandson did with letters from the author's daughter, or Warren Harding's widow did with her husband's Teapot Dome papers. This is a book about such rights and why they are wrong.
Some incidents are famous. A great artist's mural is demolished because the rich man who commissioned it is offended by its political implications. One of America's most famous collections is closed to virtually every notable person in the art world, whose requests for visits produce only a postcard from the owner saying "go to Blazes." Scholars who seek access to the Dead Sea Scrolls, monopolized and secreted by a handful of individuals for nearly forty years, are dismissed as "slime," "fleas," "gang-snatchers," and "manure," and told, "You will not see these things in your lifetime."
Playing Darts with a Rembrandt explores abuses of ownership of cultural treasures in a wide range of settings, including material of historic and scientific interest, as well as art and antiquities. It examines the claims made on behalf of the public for preservation, protection, and access to important artifacts, balancing those claims against proprietary and privacy interests, and discusses the proper role of institutions such as museums and libraries that act as repositories. Acknowledging the complexities that sometimes arise (such as the claims of history against the desire of a great figure's family to withhold private letters), Playing Darts with a Rembrandt proposes a new species of qualified ownership: to own an object of great public importance is to become a "fortunate, if provisional, trustee, having no right to deprive others who value the objects as much as they do themselves."
The fascinating stories that comprise the bulk of the book, ranging from dinosaur excavations and the Dead Sea Scrolls to the fate of presidential papers and the secrets held by the Library of Congress, will be of interest to a wide range of general readers. The extensive discussion of collectors, and their role, should commend the book to those in the art world, as well as to those professionally associated with museums, libraries, and archives. While written in a readable and untechnical way, it should also be of interest to those in the legal community who are interested in the philosophical and theoretical underpinnings of our property system.
"Sax turns his attention from public rights to conserve land and water to protection of cultural treasures. As always, he sees both sides of the argument and comes to reasoned and wise conclusions, balancing private and public interests. His prose is lucid, and his examples are both instructive and entertaining. An invaluable book for anyone interested in the preservation of our cultural resources." --I. Michael Heyman, Secretary, Smithsonian Institution
Joseph L. Sax is Professor of Law, University of California, Berkeley. He was formerly the counselor to the Secretary of the Interior and Professor of Law, the University of Michigan Law School.
REQUEST ACCESSIBLE FILE