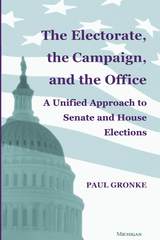 Voters simultaneously choose among candidates running for different offices, with different terms, and occupying different places in the Constitutional order. Conventional wisdom holds that these overlapping institutional differences make comparative electoral research difficult, if not impossible. Paul Gronke's path-breaking study compares electoral contexts, campaigns, and voter decision-making in House and Senate elections. Gronke's book offers new insights into how differences--and similarities--across offices structure American elections.
Congressional elections research holds that Senate races are more competitive than House contests because states are more heterogeneous, or because candidates are more prominent and raise more money, or because voters have fundamentally different expectations. Because House and Senate contests are seldom compared, we have little empirical evidence to test the various hypotheses about how voters make choices for different offices. Gronke finds that the similarities between House and Senate elections are much greater than previously thought and that voters make their decisions in both races on the same bases.
Gronke first looks at differences in congressional districts and states, showing that context does not really help us understand why Senate elections feature better candidates, higher spending, and closer outcomes. Next, he turns to campaigns. Surprisingly, over a turbulent twenty-year period, House and Senate candidacies have retained the same competitive dynamics.
Gronke also considers voting behavior in House and Senate elections. Focusing on the 1988 and 1990 elections, he argues that voters do not distinguish between institutions, applying fundamentally the same decision rule, regardless of the office being contested. Gronke closes by considering the implications of his results for the way we relate settings, electoral dynamics, and institutional arrangements.
This book will appeal to those interested in Congress, political campaigning, and voting.
Paul Gronke is Associate Professor of Political Science at Reed College.
TABLE OF CONTENTS