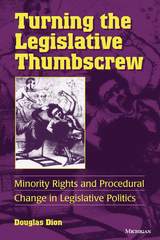 The use of filibusters in the U.S. Senate by small numbers of members to prevent legislative action apparently desired by a majority of the members--as evidenced by the battles over civil rights legislation in the 1950s and 1960s--is legendary. Similar situations have existed in other legislative bodies over time. The fear that they will at some time be in the minority has inhibited actions by the majority groups to control the right of minority groups to block legislative action. And yet from time to time the majority in a legislative body has forced a change in the rules to control the rights of the minority. When does the majority seek to limit minority rights to obstruct legislation? Douglas Dion, in a unique study, develops a formal model to set out the conditions under which majorities will limit minority rights. He finds that when majorities are small, they will be more cohesive. This majority cohesion leads to minority obstruction, which in turn leads to majority efforts to force procedural change to control the ability of the minority to obstruct legislation. Dion then tests his findings in a rich consideration of historical cases from the nineteenth-century U.S. House of Representatives, the nineteenth- and twentieth-century U.S. Senate, the British House of Commons, and an account of the Austro-Hungarian Parliament written by Mark Twain.
Turning the Legislative Thumbscrew is a work that combines formal analysis with extensive historical evidence to address an important problem in democratic theory. Specialists in legislative politics and American political development, as well as those more broadly interested in the relationship between democratic theory and institutional structure, will find the work of great interest.
Douglas Dion is Assistant Professor of Political Science, University of Michigan.
TABLE OF CONTENTS
Contents
Preface
Acknowledgments
Part 1: Minority Rights in Legislatures
1. Introduction
2. A Partisan Theory of Obstruction and Procedural Change
Part 2: Evidence from the U.S. House, 1837−95
3. Testing Assumptions and Links
4. Rules Changes in the Antebellum House
5. Rules Changes in the Gilded Age
6. The Missing Rules Changes
Part 3: Evidence from Other Institutions
7. The U.S. Senate
8. Going Abroad: The House of Commons and the Austrian Parliament
Part 4: Conclusion
9. Final Thoughts
Notes
Bibliography
Index
REQUEST ACCESSIBLE FILE