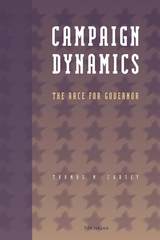 Campaign Dynamics: The Race for Governor explores the dynamic interaction between candidates and voters that takes place during campaigns. It finds that voters respond in a meaningful way to what candidates say and do during their campaigns.
Candidates for state-wide and national offices spend millions of dollars and thousands of hours trying to convey their messages to voters. Do voters hear them and respond? More specifically, do the issues candidates stress on the campaign trail influence the choices voters make when casting their ballots? The evidence presented in this book suggests that the answer is a resounding yes.
Campaign Dynamics examines more than one hundred gubernatorial elections from 1982 through 1994, beginning with case studies of the gubernatorial races in Virginia and New Jersey in 1993. Combining interviews and observations with empirical analysis of public opinion polls, the case studies develop the basic understanding of how campaigns define the set of important issues in an election. Then the analysis is expanded to consider the abortion issue in thirty-four gubernatorial elections in 1990. Later chapters test these ideas in over one hundred gubernatorial elections, combining exit poll data on upwards of 100,000 voters from dozens of races with measures of campaign themes developed out of a content analysis of newspaper coverage.
This book employs multiple methods and sources of data and represents one of the most comprehensive theoretical and empirical efforts to understand the role of campaigns in voting behavior ever undertaken.
Campaign Dynamics will be of interest to those who study state politics, voting behavior and campaigns, and democratic theory. It should also guide students and scholars interested in performing empirical tests of formal models and those wishing to combine multiple methods in their research.
Thomas M. Carsey is Assistant Professor of Political Science, University of Illinois at Chicago.
TABLE OF CONTENTS