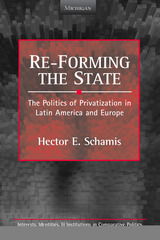 With evidence drawn from Argentina, Chile, Mexico, Great Britain, and Hungary, Re-forming the State examines the processes leading to, and the political effects of, market reform experiments and focuses specifically on the patterns of collective action and coalition building that drive privatization. The author's argument calls into question established approaches in the discipline of economics and in the fields of comparative and international political economy.
The experience of privatization shows that the public and the private are neither contradictory nor mutually exclusive spheres, and that power relations between them are not necessarily zero-sum. To stress the point, the author borrows from the literature on state formation, which has extensively examined the historical processes of key private groups. The evidence presented shows why and how, by restructuring coalitional and institutional arenas, the state uses marketization to generate political order and to distribute political power. Thus, the author specifies the conditions under which political change is conceived in terms of and channeled through economic policy; in other words, how the state is "re-formed" through privatization. Re-forming the State thus highlights how privatization is simultaneously a movement from public to private, but also a movement from non-state to state, as the reduction of state assets leads to institutional changes that increase state capacities for defining and enforcing property rights, extracting revenue, and centralizing administrative and political resources.
Hector E. Schamis is Assistant Professor of Government, Cornell University.
REQUEST ACCESSIBLE FILE